The ‘Science & Engineering Indicators’ report, published every two years, is based on government-held SEVIS visa data but excludes those students who are participating in OPT.

The report found that 62% of all international students in graduate programs were enrolled in S&E fields, with India and China accounting for 69% of the total followed by Iran, South Korea, Saudi Arabia and Taiwan.

International visa holders studying undergraduate computer sciences and mathematics were shown to have increased by 11% and 5% respectively, but declined in non-S&E fields (4%).

China, Saudi Arabia, India, South Korea, and Kuwait were the top countries sending S&E undergraduates to the US as of fall 2017. 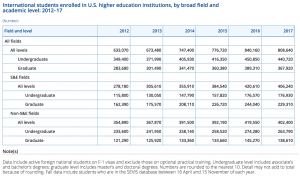 International students enrolled at HEIs in the US 2012-2017. Image: nsf.gov

Due to the current political climate and uncertain immigration policies, some experts in the field of STEM have voiced concerns for the future of US graduate S&E programs, which are heavily populated by international students.

Others have pointed to increasing competition from countries such as China for the global share of S&E activities.

Maria Zuber, NSB chair and vice president for Research at the Massachusetts Institute of Technology said the 2018 report shows a trend that the US still leads the way in many aspects of science and technology, but that the lead is decreasing in certain important areas.

“[This] trend raises concerns about impacts on our economy and workforce and has implications for our national security,” she said.

“From gene editing to artificial intelligence, scientific advancements come with inherent risks. And it’s critical that we stay at the forefront of science to mitigate those risks.”

In December 2017, the Trump administration’s National Security Strategy said it will consider restricting international students from certain designated countries who wish to study STEM subjects in the US in order to prevent technology transfer and intellectual property theft.