“The number of international students coming to Canada continues to grow,” said Laroque.

“Over the past year, there has been a significant increase in student applications – even increases of 100% in some markets.”

She added that fastest-growing source markets were China and India, which represented 49% of all new student entries in 2016, and welcomed additional visa application centres in key markets such as China to aid with processing times.

According to IRCC, India was the biggest single source of growth with an increase of 27,810 (57%) students with a valid permit as of December 2016.

Saudi Arabia and Russia were the only two declining markets in the top 20 table for 2016. Where Russia registered a drop of almost 3% for the year, Saudi student numbers decreased by  22%. 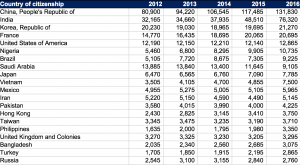 Speaking with The PIE News, Gabriela Facchini, manager of international business development & partnerships at Sheridan in Toronto, acknowledged that colleges were reporting they were “full” in the Greater Toronto Area.

“Latin America is a last-minute market and I’ve gotten tonnes of emails from agents saying can my students start in January and I have nothing,” she said.

“They haven’t been able to find a seat in any of the GTA colleges.”

This was helping colleges in the outskirts of the province and in other areas, Facchini acknowledged.

In October, Canada came out on top of an IDP research paper on global study destinations, due to its safe environment and policies which are seen as warm and welcoming.

Despite political events south of the border, Canadian educators maintain it is their strengths, not US weaknesses, that has led to these increases.