The latest ICEF i-graduate Agent Barometer has revealed a drop in attractiveness for both the UK and the US as study destinations among education agents for the third consecutive year. A survey of potential reasons for the decline included growing apprehension around visas, economic concerns and the global political landscape 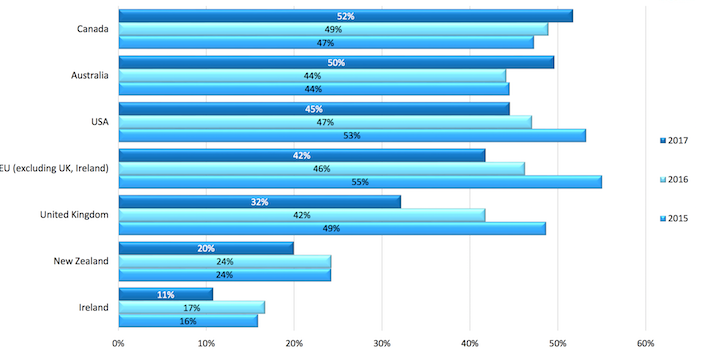 Established in 2007, the Agent Barometer monitors the opinions of education agents worldwide and provides an insight into agent’s perceptions of international education markets.

Almost four-fifths (79%) indicated that they recruit for undergraduate programs and 76% for post-graduate courses, up slightly from 74% the previous year.

Nearly three quarters (74%) of agents said that they also recruit for language programs, and half (49%) promote secondary schools and vocational training courses (48%).

Reflecting the recent surge in international student numbers going to Canada, the county was the top destination for agents sending students of all program levels in 2017, with 52% of respondents reporting placements there, followed by Australia with 50%.

The number of agents reporting global political concerns among their clients grew from 30% of respondents in 2016 to 35% in 2017.

Country breakdowns, however, reveal even greater anxiety about the global political situation, particularly among students going to the US (76%) or the UK (48%). 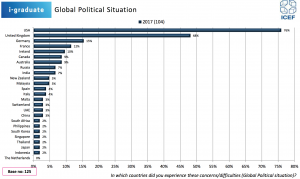 Similarly, the global economic situation was a concern for clients going to the US (52%) and UK (51%), with Canada coming in third at 25%.

Despite the decline in some areas, the US topped the poll of best study destinations for MBA programs for the eighth year running with 31% of the vote, down from 41% in 2016. It was also the number one option for work and travel/study programs (27%).

For the third year in a row, the UK was the first choice for English language courses with 29% of the vote, followed by Australia and Canada with 22% respectively.

When it came to student and parent worries with regards studying abroad, there was a significant shift between concerns prior to departure and after student’s arrival at their study destination.

Difficulties with language were highlighted as the main concern prior to leaving according to 60% of respondents, however, it dropped by almost half to 31% upon arrival in the host country.

Difficulties with accommodation were highlighted as a major concern both before departure (46%) and upon arrival (52%), echoing recent reports around international student housing shortages.