HomeLatest NewsFrance is more attractive for study than Germany, US, UK, survey finds

France is more attractive for study than Germany, US, UK, survey finds

The attractiveness of France as a study destination for international students is continuing to grow, with nearly two-thirds (64%) of respondents in a recent Campus France survey choosing it ahead of Germany, the US and the UK. Only Canada came in ahead of France, with 69% respondents choosing it as a study destination that is increasing in attractiveness.

Between July and October 2017, Campus France, in conjunction with the Kantar Public Institute, conducted a survey of 14,245 international students on the attractiveness of France as a study destination.

The students were divided into three groups, those planning to come to France to study (2,528), those currently in France for their studies(4,876) and those who have previously studied in France (6,841).

As with previous surveys in 2011 and 2013, the barometer aimed to understand how France has established itself as a choice of study destination, the role of the French language in the attractiveness of France, and what the students remember from their stay.

More than 88% of those who study or have studied in France said they are satisfied with the value of the qualification and the quality of teaching (up from 86% in 2013).

The quality of training (46%) remains at the top of the criteria for choosing France, however, the culture (38%) and the improving French language (41%) were seen as more important than the value of the qualification received (32%).

Global competition for international students was also highlighted in the survey, with almost half (47%) of students who chose France declaring they had also considered Canada, the UK, US or Germany (up from 45% in 2013 and 40% in 2011).

Among those students who hesitated about making a decision about which country to study in, 77% said they made France their first choice. 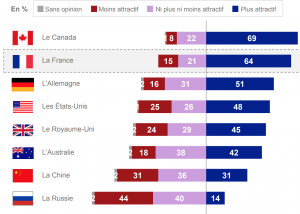 Politics were a big factor in determining a country’s attractiveness, according to the survey.

While interest in studying in the US remains high, the election of president Donald Trump was seen as a  negative for 76%, and Brexit was shown to reduce the attractiveness of the UK for 54%.

A number of criticisms of France as a destination were also revealed by the survey, however, several issues have shown signs of decreasing year-on-year.

The lack of work possibilities in France after graduation was also highlighted as a criticism by 42%, compared to 52% in 2013, despite recent post-study work liberalisations.

Each year more than 300,000 international students choose to study in France, making it the fourth most attractive country and the leading non-English speaking destination for inbound student mobility, according to UNESCO.